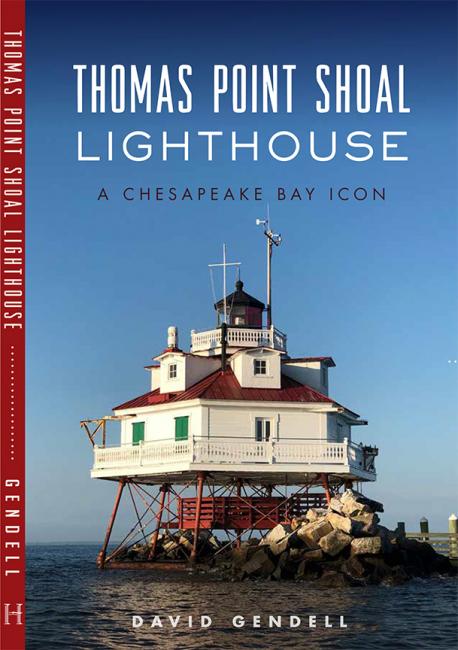 In the first book written on the iconic 1875 Thomas Point Shoal Lighthouse, author David Gendell has written an informative and enjoyable book that weaves an entertaining story about the lighthouse. His rich tale pays tribute to the history and maritime culture of the region. This lighthouse, located in the Chesapeake Bay a few miles offshore of Annapolis, Maryland, has the distinction of being the last operational cottage-style screwpile lighthouse in the nation, which is why it was designated a National Historic Landmark in 1999.

Gendell is a life-long Annapolitan and Bay sailor, so he already knew his topic well, but he went far beyond that by sharing his excellent research on historical facts about lighthouses in general, about Chesapeake Bay and screwpile lighthouses, and, of course, about the Thomas Point Shoal Lighthouse and its 1825 land-based predecessor without getting overly technical. He used just enough academic detail to lay an accurate and valuable context for the story. He makes extensive and appropriate use of historic images, drawings, and charts to help visualize that story, which includes oyster “wars”, fishing, ice floes, a disappearing culture of lighthouse keepers, and dramatic hurricanes.   The latter part of the book discusses the period leading up to 1986 when the lighthouse was automated by the U.S. Coast Guard and unmanned. The author then follows through with the period starting in 2004 when a partnership was formed, primarily between the City of Annapolis and the U.S. Lighthouse Society (USLHS), that took over ownership, management, preservation, and the highly anticipated opening of the lighthouse to the public––many who had previously sailed by the light for years but could only wonder what the interior was like. As the person who managed those efforts for 15 years for the USLHS, I was especially pleased at how well Gendell captured the details and spirit of those efforts and of the incredible volunteers that proudly poured––and continue to pour––their sweat and soul into this beloved, special lighthouse. David Gendell’s book is a timely and wonderful contribution to help preserve the story of the Thomas Point Shoal Lighthouse, its builders and keepers, and its volunteer preservationists and docents for generations to come. In August 2021, the U.S. Postal Service issued a set of five commemorative stamps on lighthouses of the Mid-Atlantic, and one of those is Thomas Point Shoal. Commemorative stamps help preserve a nation’s most important history for national and worldwide audiences, and the Thomas Point Shoal Lighthouse stamp is no exception. But the stamp alone doesn’t tell the story; it’s a starting point from which to explore the larger, exciting story. I can think of no better way to explore that story than to read David’s book.