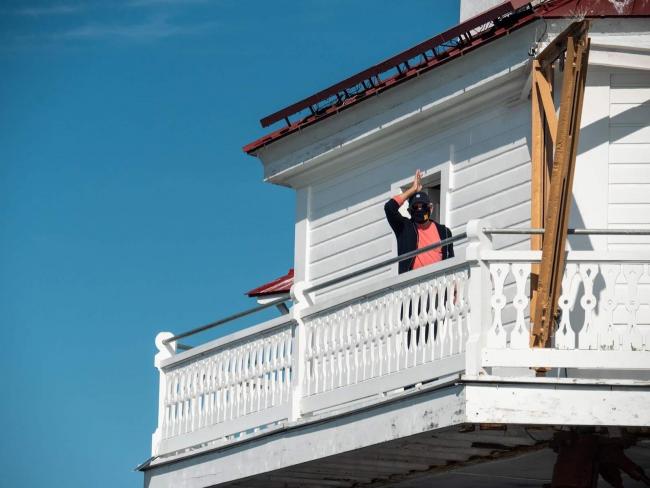 On October 11, we hosted Jimmy Buffett at Thomas Point Shoal Lighthouse, an iconic Annapolis sight that caught the “Margaritaville” singer’s eye. Plans to get Buffett and his crew out on the Chesapeake Bay for the perfect sunrise backdrop were hastily arranged Thursday night . Local author Dave Gendell joined Lighthouse Manager John Potvin at dawn to open up and greet Mr. Buffett, who arrived with a production crew. Potvin and Gendell (the author of the new Thomas Point Shoal Lighthouse book) gave him a tour of the lighthouse.

In the early morning light, Buffett played one song up in the gallery and another in the lighthouse’s parlor.  Buffett performed the two songs for a new music video series following the singer on his voyage from Long Island, New York, to the Bahamas. The song selection is under wraps until the video debuts.

Thomas Point plays a special role in the video, and one of the songs is new to Jimmy and has never been played by him before. Buffett, a sailor and lighthouse enthusiast, is anchoring at various seaside sights along the way since the pandemic canceled most concerts.

“It was fascinating to see the production crew arrange the set, and have Jimmy sing to Dave and I with no one else aboard.” Said John Potvin. “We had kept the visit secret, although a few boaters recognized his boats (a power catamaran and a sleek sailboat, both with distinctive sea foam green finishes). But the public gave us the space we needed to film the set over about 3 hours.”

Mr. Buffett applauded the work that has been done by the preservationists for the Chesapeake Chapter of the United States Lighthouse Society. The local press picked up on the story, and there were plenty of positive comments from the public on Thomas Point Shoal Lighthouse.

It seems everyone loves Thomas Point!!!