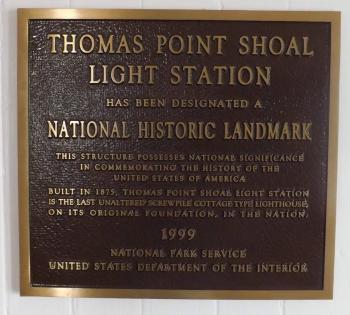 "The lighthouse was first lighted on November 28, 1875. A 3-½ order Fresnel lens showed a flashing red light every 20 seconds. This characteristic flies in the face of the color standard of red charac-teristics being on the right side of a channel when heading into a port, up river or bay that the Lighthouse Board established shortly after it took over in 1852. The automatic fog bell was struck three times every 30 seconds. As the machinery and bell were located on the same level as the bedrooms, that must have produced some sleepless nights."  -- (from the article above)

Below are two additional videos about the history of the Thomas Point Shoal Lighthouse!

"Legacy of the Light" - A 13 minute short film about the history of the Thomas Point Shoal Light Station.

News Reel Video: a fascinating news reel made in 1986 documenting the automation of the lighthouse and the final transfer home of the last lighthouse keeper.

Light Hearted episode 39 – John Potvin, Thomas Point Shoal Lighthouse, Maryland
In this episode of Light Hearted, host Jeremy D’Entremont and co-host Michelle Jewell Shaw also look at the origins and history of screwpile lighthouses, which were developed by the Irish engineer Alexander Mitchell. In addition is an interesting interview John Potvin our preservation foreman who is actively involved in the bidding and specification preparation for the rehabilitation of the lighthouse.